We are looking to purchase UGcS for Mission planning.

For those who have purchased the software and utilized, do you find the LiDAR planning tools are worth the extra price in the Enterprise package?

I prefer to fly the calibration for the R2A manually and saw that you cannot add the figure 8s as part of the mission itself, so that does not seem necessary for our use case. Are there any other features that make the Enterprise package worth?

You can use Pro to do LiDAR flights you just need to calculate the flight path spacing based on the flight altitude (AGL), FOV of the sensor, and preferred overlap. Enterprise does this for you but no that complicated of a calculation. I’ve tried the automatic calibration flights but it gave some jerky behavior, not too difficult to fly the figure 8s manually.

Thanks for the response!

Is there no way to enter the sensor values similar to how you would do it in Pilot?

As far I I know you can’t enter LiDAR FOV in Pro, only camera sensor size and focal length for photogrammetry missions. But you can create a spreadsheet to calc the swath width and enter the variables. I would get a free trial of Enterprise and try both LiDAR flight planning and manual flight planning to see if the extra cost is worth it to you.

There is also Litchi which is free but doesn’t offer anywhere near the same flexibility. I like being able to import custom DTM/DSMs in UgCS to be able to view the flight path against the terrain along with the smooth flight with adaptive bank turns. A bit of a pain to use a laptop in the field but you get used to it.

Map Pilot Pro… check it out. It is a very good planning and flight software.
Not too many bells and whistles, but enough.

Did the newest update provide FPV yet?

If I read the website comparison matrix correctly, I do believe they have added FPV.

Unsure though as I haven’t gotten my hands on with it yet.

New version has FPV! We still run the second M300 remote for FPV/emergency control but it’s nice to have it on the pilot remote now.

They have smoothed out the calibration patterns as well in the latest updates. Figure 8s fly silky smooth and fast now.

We just purchased the perpetual license as the enterprise monthly price has gone up.

FPV through the app or on a second controller?

I just asked them about it and they said it wasn’t yet a feature.

I’ve always watched the FPV through the DJI Pilot app running on the second controller.

UGCS is running on the main remote, and now also has FPV.

UgCS has had the FPV view built into their “UgCS for Android” app for some time now. Although sometimes it doesn’t work, it’s been there for quite some time.

Map Pilot Pro does NOT have FPV functionality and when we asked them about it they told us that not enough users required or requested it for them to develop it currently.

Both apps will allow another RC to be connected and using the DJI Pilot app to visualize the FPV during missions, and or take manual control at any point in time.

I just wanted to make sure we were all talking about the same thing here. I was getting a little confused.

I use Pilot and find it so much easier. I used the free trial period of the UGcS Ent and i didnt even care for it or find it saving me any time. I dont recommend buying anything for that much money that you can do yourself in 5 min per flight in the free Pilot app.

I want to take a minute to inform anyone here that is using UGCS about a software glitch that contributed to me crashing my DJI M300 into powerlines. I planned a simple mission that began a 120’, but then dropped down to 100’ for the “lidar corridor” part of the mission. When the drone began to drop down to the lower height, instead of stopping at 100’, she just kept dropping all the way down to 40’ where it struck a powerline, and plummeted to the ground (with my beautiful R2A in tow).

I sent the flight data to UGCS support team, and they shortly responded with the following 2 emails: 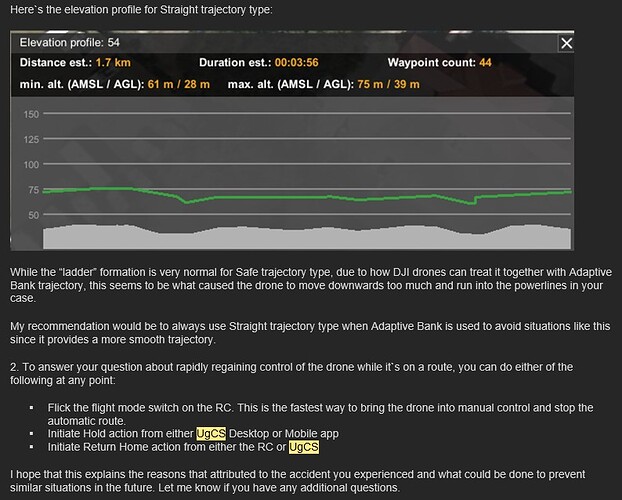 I don’t completely buy their explanation that “its a DJI issue” It seems to me like an issue like that should be solved with the flight control software. Also, the drone dropped 60 feet below the elevation that the flight trajectory path should have regardless of the fact that I had “safe” trajectory turned on.
They then sent out this email to all their customers: 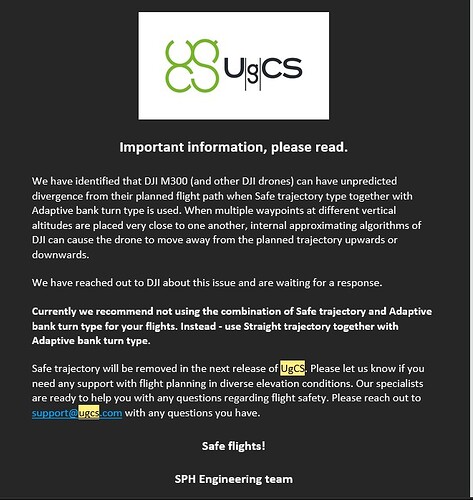 In conclusion: I still don’t totally trust the software, I should have known how to flick the switch to regain manual control more quickly. I really just panicked and tried to override the mission using the sticks, forgetting that the sticks wouldn’t give me back control until I stopped the mission. If you’re a new ish user like myself, BEWARE.

Hmmm. Thanks for the insight.

I have yet to test. May have to use our Mavic 2 Enterprise Advanced for the first few test missions.

Nice to know that switching the flight mode on the controller will bring back manual flight.

By flicking the switch on the Smart Controller, do you mean switching the TPS button in the center of the controller?

Thats what I have been told by a few sources now, but I have not had the chance to test that out yet. ( My drone is in the shop)

Thank you! Great to know. @RR_Flight_Ops

Have you ever experienced similar glitches that DavyJohnson has?

I haven’t experienced that exact issue. Usually the issues I encounter have more to do with using my phone as a hotspot and it not being recognized properly by either the client or the RC.

due to the constraints of DJI, the stability of some features in UgCS are being identified as problematic, one of which is using the SAFE and STRAIGHT mode in several scenarios. UgCS, in its next firmware update, will remove the SAFE mode, basically eliminating issues such as you experienced.

I just had a good conversation with developers yesterday about this and other issues. Going forward, the software is solid and we use it almost every day. Just gotta use STRAIGHT mode, especially when using Adaptive Turn…which you WANT to use when flying LiDAR.

I’ve got UgCS’ ear, so to speak, right now and will keep that ‘active’.

If we are flying an area that is completely flat, (Houston area), is there a need for UgCS, seeing as there will be no terrain “following”. Also, we we decided to go with UgCS, I assume the Enterprise is the worry free, does everything for you version…? Would you recommend perpetual or subscription?