Recently I was able to test out the R2A Facade Mount on our M210. The mount worked flawlessly, although I may need to add some height to the landing gear as the USB Drive is slightly touching the ground when stationary. I was so used to flying NADIR that the Facade mount introduced many opportunities to capture data that I otherwise could not before. It also made me approach the structure differently as I wanted to capture all angles. When in PcMaster, you MUST change the ROCK Orientation setting. I changed the orientation to the following: 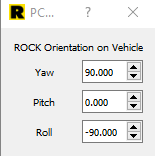 After changing the settings, the data was displayed correctly. This example applies to the M210 RTK. Overall, battery life was not affected much by the added Payload (Mount). I can not wait to see upcoming scans and the detail the Facade can capture. I am also going to be attaching the R2A facing upwards like recently mentioned in Harrison’s latest Youtube video to capture points underneath of whatever i am scanning.

Thanks again ROCK Robotics for an awesome product!

You should technically change the orientation of the unit in the GUI prior to your capture. That sets you up for success for 2 reasons:

Also play with your range gate “distance” values in PCMaster in the Cloud Filters. We’ve found that it’s best to limit the far end to much closer than when doing a NADIR capture.