Optimum speed and altitude for R2

For the R2 sensor what would I expect in degraded performance if I was flying at 80m AGL and at 6m/s when compared to the optimum flight speed and altitude?

I came to ask a similar question - Looking for the optimal height/overlap/speed in various scenarios. Today I flew at 60m, 50% overlap and 11 mph in a wooded area and I’ll be processing soon. I do wonder what I could achieve on a more conceptual basis for contours, like in a county with no topo on a prospective land development site, could I fly say at 300 ft / very low overlap and fast to generate “good enough” topo? Would help to get a best practices FAQ or video on this. I have some construction sites that are wide open and I’d assume I can fly those faster / less overlap but don’t want to have to redo stuff.

Flying at about 50m AGL and 5-6 m/s is the optimal speed for getting sub 5 cm vertical accuracy.

The higher and faster you fly, the less accurate the readings of the sensor will be. However, there are more factors at play than just height and speed.

The reflectivity of the surface you are scanning also plays an important factor. Some surfaces have a harder time reflecting back to the sensor than others. For instance, we did a scan over some transmission lines in the desert: 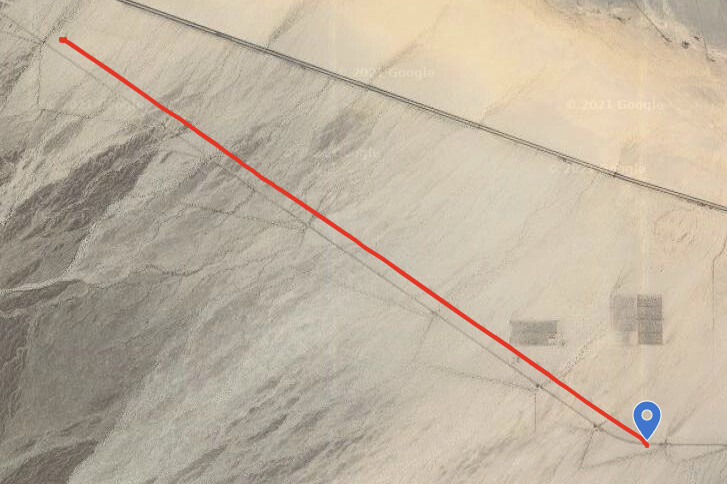 We were able to fly much higher and faster and still get sub 5 cm vertical accuracy because the surface reflected the light back to the sensor extremely well.

I will look to categorizing in a handy way our actual experiences with speed / height / reflectivity to give the community some more ideas on what to expect.

Just checking back in on this to see how to establish some good flight parameters for different deliverables. I keep getting asked about “GIS Level” contours in rural areas on large tracts. Would love to fly this high and fast to just get some general idea of the land (better than USGS) but need to know the bare minimums to make things work. I’ve been flying at about 75m and 30% overlap and 15mph on my last few missions and with all my GCP’s I’ve been within 1-3 in, which is within our survey threshold. It is a time with almost no leaves though, and it doesn’t snow where I work. As the foliage comes in soon I’m sure I’ll have to be slowing down.

This is very relevant to my work also but I would like to fly higher and much faster, closer to 50mph and 150m. If we get this sort of study please do the analysis at other points beyond 75m and 15mph. Thanks

@Alex
I have a client that wants to fly between 5 and 10 meters AGL. They want to be able to measure the height of oats. Is this doable? If so any suggestions on speed etc.

I haven’t personally flown over oats to capture lidar data. So, I would spend a couple of hours testing quick flights at different altitude / speed until you are happy with the density. Lidar picks up tall grass no problem, so ultimately it shouldn’t be an issue.

Would the LiVOX laser even distinguish that? Oats is often right around that 1m to 1.5m tall, which would be below the standard 2m gap for multi-return points.

Or would we need to rely on the single return density to indicate the tops and ground elevations?

At ~30ft AGL the beam from the LiVOX will make an oval on the ground 50mm high by 5mm wide if directly overhead. Out at the end of it’s 70d FOV at that AGL the beam’s dot is stretched to ~7mm wide.
already being wider than the typical plant spacing, at least in one direction, is it worth flying that low or is it better to fly higher, with a beam footprint closer to 15cm by 1.6cm and rely on the difference in intensity (ground vs plant)?

@jmosher
My farmer 2cents would be to fly medium height (100-150ft agl), with A LOT of overlap (>75%), given the columnar nature and density of the grassy plants, I don’t think speed will matter much as long as you are not spreading out the laser’s passes directly under the sensor too much (think scan frequency for vertically rotating sensors). Your overlap will be your key since you want to both see down the stocks of the plant and skim the tops of them. Flying that low given the beam’s footprint wouldn’t seem to help much in my mind… but am eager to be proven wrong.

I’d love to hear how this goes… messy grass is my nemesis.