I post this here so we may learn something from a bad data set? I completed a flight of a storm pond last week that has power lines along the east and south ends of the job. As I am still learning the secrets of the R2A, which are not so hard when you follow the published guides, but this one has me confused!

Look at the southern power lines… and there is a large gap!! Everything else came out, mostly. The mission was flown at 60m AGL with 30% overlap (based on the suggested camera settings and using the not so great M300 mapping software) .

(Images look to the north) The southern power lines had at least 3 separate passes over the missing section. The larger power lines to the east are almost perfect, and this was only one pass directly on the alignment and some overlap from the passes building up to the power line. There is more road and power to the east of the those big lines, but that was caught in a side pass and not directly imaged! Which really leads me to wonder why only the south power line has a large missing gap. In the color photo, you can see the missing strip of data? How does that work? Where have I gone wrong?

Thank you Rock Robotic (and community) for your assistance. 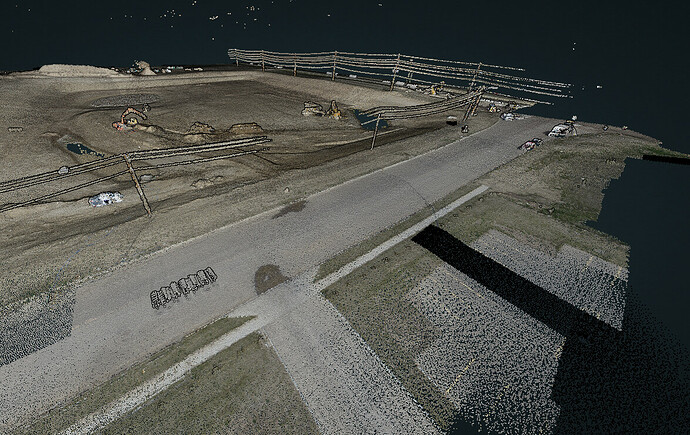 Welcome to the community! We love to see new users posting questions, and this is a great one!

It looks like you need a bit more overlap when you are trying to cover more than just surface data. 30% is the recommended minimum overlap for ground data only. If you’d like to cover tall trees or powerlines you’re going to need to increase that overlap to cover the tops of tall objects.

The Livox Avia sensor is 70 degrees /\ looking straight down (NADIR) so anything outside of that triangle won’t be captured.

This is a bit of an odd looking gap considering the rest looks pretty well covered. A sure fire way of identifying the hole in your data is to use the GPS Time view and slider. It will allow you you visualize your flight and see the overlap quite clearly.