Just colorized today’s LiDAR mission, and seeing these alignment and color banding issues. Anyone have any ideas on what this can be? 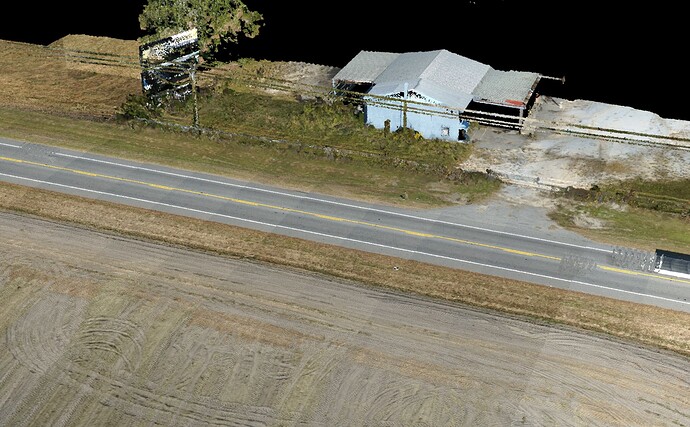 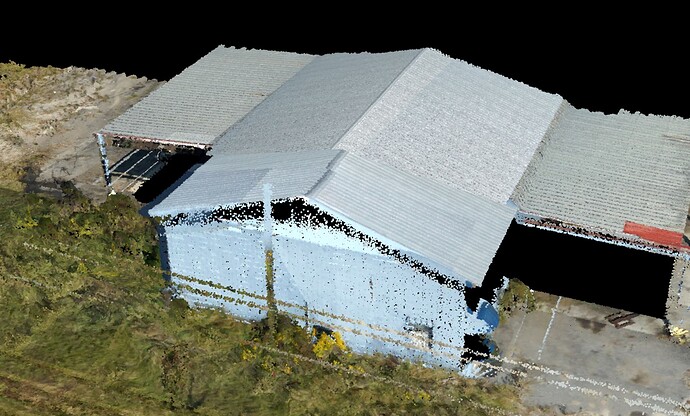 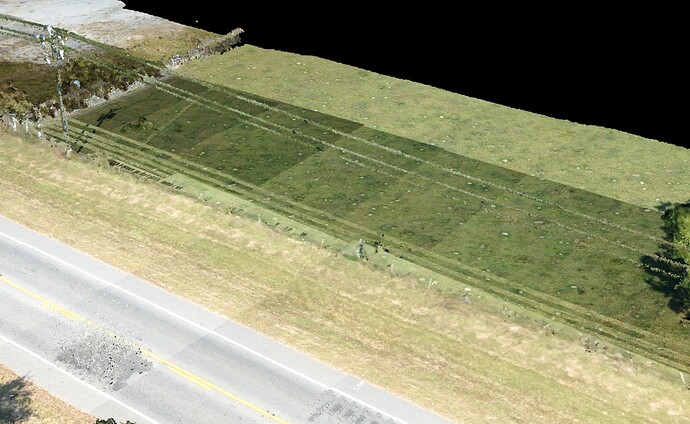 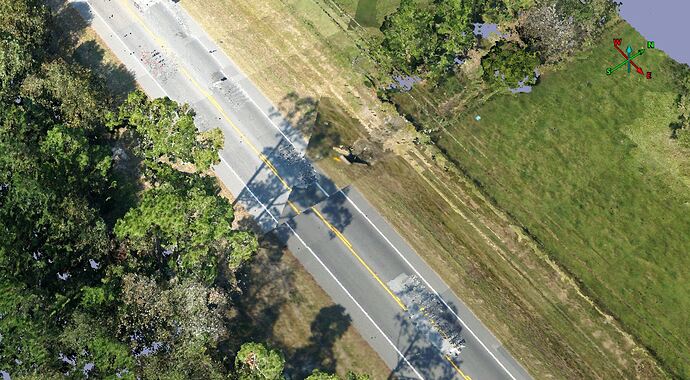 I’ve seen these misalignments before, looks like you need to re-process your data.
Be careful when you are entering your gnss base station data… a few careless numbers and your whole world becomes a nightmare.

As for the banding, I believe that is a function of the actual image? Some are darker, some are lighter. I usually spend a few minutes cleaning my camera folder from useless imagery; like my takeoff, figure 8’s and landing. Especially if you have an epic return trip from your mission, you can see and count the number of photos your ROCK LiDAR snapped.

I will definitely do a pre and post photo folder cleanup. I did miss that. As for entering the base station data, I usually just take the default. Maybe that is not correct to do?

You “could” use the default, sure. Most of the time that works.

Here is the devil in the details: For ALL your correction data lives in a spreadsheet file. The pc master program only reads the FIRST line of the text… so, if your gnss recording is hyper spot on, sure!
However… I always correct mine (its stupid easy) and I have noticed that, on occasion, the “default” position is very, very out!

Once upon a time, I used the “commercial” correction station (my base station died in combat that day) and I was monkeying with the lat/long… and that is where I noticed a pronounced mis-alignment if the lat/long are not correct!

Also, just a few weeks ago, another entire data set was mis-aligned. The first row was low, second high, third low… Yeah, just re-process. It may fix the issue, it did for me!

Nice. Great info as always! So what is your method to correct the data in the spreadsheet? I did not park the Emlid over a known point, but I did let it soak for over 3 hours. I was going to go thru the OPUS correction, but have not done that before.

So… to “correct” the data in the “spreadsheet”, you need to KNOW where your point is!!

You and I go to the field, we are going to scan a 20ac plot. You take your Emlid, set it up on a random point and cook it for three hours. This is going to be a really good point, very accurate? So, what was that point? Your Emlid knows…

Your Emlid, which knows nothing, is set up on point 5,5,100 (meters or feet, don’t matter). You know this point IS 5,5,100, and you can bet your paycheque on it. You know the point coordinates because
1: you looked at the point data from your gnss data collector prior to recording on that point.
2: a surveyor told you what the point’s coordinates

Now, we take our gnss receiver and set up on the KNOWN point. We tell the RX that the point, where it is, is 5,5,100. Great… now it records… (here is where the “spreadsheet” comes in…)

If you are seeing data delamination, separation and other garbage, the first second (first line of the spreadsheet) says it is one block away, and you take that as gospel, your whole data set will be wacky because the correction factors, based on your known point, was incorrect the whole time!
You fix this by entering the KNOWN point in the little window that pops up in PC Master.

This is something we’ve also run into, and it’s interesting to see that other people are having the same issues. Sometimes we’ll get poor flight alignment and simply re-running the entire PCMaster/PCPainter process will fix it.

We’ve also had flights where we mistyped the Lat by 3° or the elevation by 100m, and it throws everything out of whack. This again confirms that the initial base coordinate entered is important.

This is getting a bit off topic, but do you have a good way of finding these unnecessary images? It’s easy enough to spot the landing and takeoff, but I find it very difficult to spot the Figure 8’s and the return home from just looking at the photos.

Figure 8’s are easy to spot…

I should also mention that I NEVER throw out my photos. I create a “removed photos” file, just in case I over clean.

I ran PCMaster again, and this was my graph results. This does not look right - 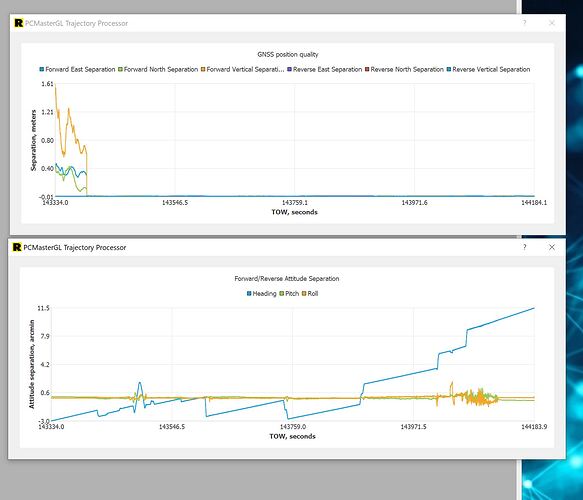 Maybe I have a faulty R2A unit??

It seems to build the intensity point cloud just fine. It looks perfect. Maybe my outbound and inbound straight lines were not quite long enough?

We only use one Emlid and always let it run for two hours minimum on a project, generally a lot longer. And typically, the Emlid isn’t setup over a known point. Then when we return to the office, we use Emlid studio and a CORS site to get our Emlid’s location spot on. Once you have that done and have all of your GCP’s you should be golden. Can’t stress the GCP’s enough either they are your lifeline in this type of work.

Thank you for the reply @cr8648. I also use one Emlid, and it was soaking for over 2 hours. I did not think about the Emlid Studio/ CORS to locate. I will do this!
I did have 10 GCP’s on-site also soaking for over 2 hours. Propeller Aeropoints. My highspeed passes in and out were only 4-5 seconds, maybe that was the issue.
Going to re-run this in PCMaster/ Painter again with exact base station coordinates from Emlid Studio/ CORS.
Thank you!

Next time you do this would you mind to take some screenshots? I’m working on an article on how to do this and it would be helpful!

@Tweek This ended up just being some calibration camera issues, and we’re working on an article based on this experience on how to fix this yourself!

A big shout out to @daniel.windham for working the problem over the last couple of days and finding the solution to my photo alignment issue. See his great video and write up! Thank you Daniel!

Here is a walk through of how to calibrate the camera on your ROCK R2A. 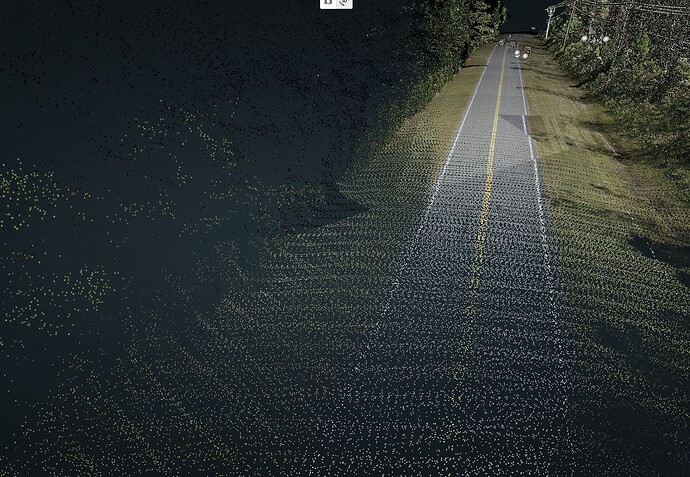 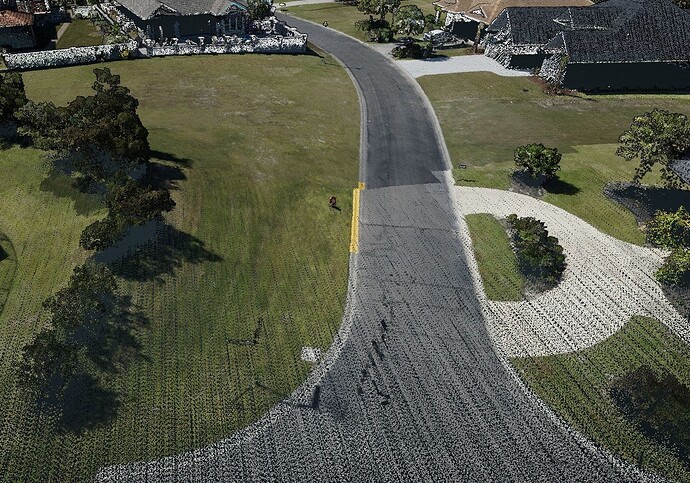 Why aren't the photos in my colorized point cloud aligned in the ROCK Cloud?

See below for troubleshooting tips for common causes of photo misalignment.